You are here: Home / blog / Humor / The Bad Driver’s Handbook : Hundreds of Simple Maneuvers to Frustrate,... 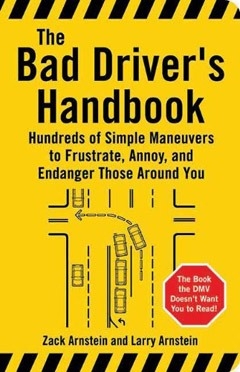 The Bad Driver’s Handbook is the book the DMV doesn’t want you to read! Zack and Larry Arnstein (The Dog Ate My Resumé) debunk the myths of the “good” and “bad” driver by describing in detail the liberating truths about driving that have long been suppressed. Comical commentary and tongue-in-cheek observations are provided on such topics as:

• Bribes, Threats and Other Secrets to Getting Your License
• Intimidating Pedestrians
• Making Your Car Louder
• Turn Signals: Why Give Up the Element of Surprise?
• Tailgating: How Close Is Not Close Enough?
• Sleeping at the Wheel (Do's & Don'ts)
• Motorcycles: Faster, Cooler, Safer!
• Driving When You Can No Longer See
You’ll also find exhaustive lists of “Did You Knows?” (“Did you know if you get boxed in by other, smaller cars in a parking space, you have a legal right to smash into them, and bash your way free?”); Definitions (Pedestrian: “Annoying obstacle infringing upon your right to drive at the speed you feel most comfortable”); and Safety Tips (“When challenging another driver to a race at a traffic light, be sure to wait until the light has almost turned green before mashing the accelerator to the floor”). Hidden meanings behind ordinary traffic signs are revealed, including the coyly worded No U-turn sign, which actually means look both ways for police officers, and if you don’t see any, go ahead and make the U-turn!

The co-author of The Ultimate Counterterrorist Home Companion, The Bad Driver’s Handbook, and The Dog Ate My Resume has recently graduated from college with no idea what he’ll do with his life. This means he has plenty of time to tell you what you should do with yours. Also having not yet made any major life decisions, he has not yet made any major mistakes. He is currently working on his resumé.

The co-author of The Ultimate Counterterrorist Home Companion, The Bad Driver’s Handbook, and The Dog Ate My Resume squandered a perfectly good college education by becoming a writer for such TV shows as Saturday Night Live and Not Necessarily the News, for which he has won two Writers Guild of America awards. He is currently avoiding useful activity as one of the three writer/editors of Ironictimes.com, an online satirical weekly. He encourages young writers to pursue their dreams, but also to learn a more dependable trade, like armed robbery.

“In this hilarious parody of a how-to manual, Zack and Larry Arnstein cover every driving situation that has ever caused damage or even just annoyance. From driver’s ed to car alarms and tailgating to drunk driving, it’s all here, every kind of bad driving situation and opportunity for making things worse that you can think of and, impossible as it may seem, even more. . . . While The Bad Driver’s Handbook makes a perfect anonymous gift for someone whose driving terrifies you, make sure you read the book before passing it on. Most of us spend a major part of our lives dealing with traffic, cars, and driving, but we don’t spend nearly enough time laughing about them.”
—RoadTripAmerica.com

“The Bad Driver’s Handbook provides expert driving advice on everything from surviving road rage to outsmarting your average street sign . . . The book shares liberating truths about driving that you won’t see in any DMV Handbook . . . This book is truly funny! . . . The authors could end up with the Noble Peace Prize!”
—National Public Radio’s News and Notes with Ed Gordon

“Finally someone has come along and, with the appropriate scholarly detachment, put all of our long-running love affair with awful driving into its proper historical and social context. OK, maybe not. But what Zack and Larry Arnstein, authors of The Bad Driver’s Handbook, have done is create a hysterically funny guidebook to the most stupid, outrageous ways we act out on the road.”
—Detroit Free Press

“The funniest book ever penned on how to drive.”
—The National Post

“Any driver will tell you that being corralled like this at freeway speed is a dangerous situation. I had to do something before it was done to me. . . . . Fortunately, I had just finished reading the most indispensable book ever written for the motoring public: The Bad Driver’s Handbook. The book, which deserves a Pulitzer for mayhem, touts “Hundreds of Simple Maneuvers to Frustrate, Annoy, and Endanger Those Around You.” In other words, how to drive like the average American.”
—Salt Lake Tribune

“So, how do you use bribes to get your license? Or avoid tipping off other drivers with turn signals? Or get a good sleep while at the wheel? Maybe you want to scare the bejeebus out of pedestrians, or keep driving when you’re blind as a bat? All these secrets and more are revealed in The Bad Driver’s Handbook: Hundreds of Simple Maneuvers to Frustrate, Annoy, and Endanger Those Around You. Finally, a practical book.”
—IGN Film Force

“Takes a common, everyday bugaboo and turns it on its ear. . . . The humor here is in the recognition of our own challenges behind the wheel and the amazing folly we sometimes observe in others.”
—BookPage