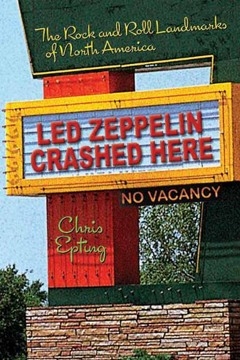 In Led Zeppelin Crashed Here: The Rock and Roll Landmarks of North America, pop culture historian Chris Epting takes you on a journey across North America to the exact locations where rock and roll history was made. Epting has compiled nearly 600 rock and roll landmarks, combining historical information with trivia, photos, and backstage lore, all with the enthusiasm of a true rock and roll devotee. No other book delivers such an extensive list of rock and roll landmarks—from beginnings (the site where Elvis got his first guitar), to endings (the hotel where Janis Joplin died), and everything in between. The rowdiest and the most talented rockers are all featured, with sidebars on musical greats like Bob Dylan, The Beatles, The Rolling Stones, and U2. And, of course, you’ll learn all about the infamous “Riot House” on the Sunset Strip where Led Zeppelin “crashed.”

Led Zeppelin Crashed Here: The Rock and Roll Landmarks of North America is an entertaining and rollicking road map through the entire history of rock and roll!

2 . Roll Over Beethoven: The Beatles, Bob Dylan, Elvis Presley,
and The Rolling Stones

3 . Kick Out the Jams: Concert Sites and Live Performance Locations

On a drizzly May 1, 1975, the Rolling Stones created a bit of bedlam in Lower Manhattan. To announce the dates of their Tour of the Americas, they had scheduled a press conference at One Fifth Avenue. As reporters gathered inside the hotel to wait for the band, a commotion was noticed outside. A rumbling was heard coming down Fifth Avenue and lo and behold, it was the Rolling Stones on the back of a flatbed truck performing “Brown Sugar.” Stunning the lunchtime crowd, they ran through the song before tossing out leaflets to those on the street. On the sheets of paper were the tour dates. The flatbed then drove around the corner; the band jumped into waiting cars and was gone in a flash. The idea for the impromptu concert came from Stones drummer Charlie Watts, who’d read that jazz bands would sometimes promote their evening concerts with truck tours around the city.

I was in 8th grade at the time, 13 years old, and in the previous year or two had become a huge fan of the Rolling Stones. When I got home from school that day, I was glued to the news reports of the event. I knew exactly where that truck had pulled up and could not believe that the Stones, in the flesh, had actually performed within inches of people on the street. That night, my father told me he had gotten tickets through his company for us to see the Stones at Madison Square Garden and I began counting down the days until June 22nd. When I hear people who grew up in the 1960s talk about seeing The Beatles on Ed Sullivan and how that changed their lives, well, that’s what May 1, 1975 was for me: a lightning bolt. The day I developed a serious emotional attachment to rock ’n’ roll.

My two favorite American creations are baseball and rock ’n’ roll, and since I’d already written a book about baseball it only seemed natural to pen one on rock ‘n’ roll. Because it was born here in America, with roots going back to Congo Square in New Orleans, there are many landmarks, shrines, and touchstones throughout North America and that’s what led me to approach rock ’n’ roll from a geographic angle. From the store where Elvis bought his first guitar to the site of Buddy Holly’s plane crash to the location of The Beatles first performance in America, the landscape is laced with hundreds of places relevant not just to rock ’n’ roll, but to rock’s building blocks as well. Sites related to jazz and the blues are just as important in a book like this to help form a foundational perspective, and so they are included, too.

Obviously, there are many sites in this book that involve a certain level of mayhem and excess. This is rock ’n’ roll, after all, and it goes with the territory. That said, something that struck me while writing this book is how different music would be today if the likes of Jim Morrison, Jimi Hendrix, Janis Joplin, and so many other artists taken from the world so early in life were still here. Their early exits parallel those of other icons like Marilyn Monroe and James Dean in that they remain forever young, but it’s interesting to think about how music might have been altered had they not died. The thought of Gram Parsons joining the Rolling Stones onstage today, or a joint Hendrix/Joplin tour—so many intriguing possibilities struck down by drugs and/or bad luck. But again, that’s rock ’n’ roll.

The other day, my son and I were in the car listening to Delta blues legend Robert Johnson. Charlie, who at this writing is 13, snapped to attention when a song called “If I Had Possession over Judgment Day” started playing. “That’s ‘Rollin’ and Tumblin’” he said excitedly, referring to a song off the current Bob Dylan album Modern Times. It struck me once again what a powerful force music is in our lives, and how our homegrown American art form gets passed down from generation to generation. The Robert Johnson song had been adapted over the years by Muddy Waters, Cream, and, most recently, Bob Dylan. Now, the musical roots from the Mississippi Delta had found their way to our driveway in Huntington Beach, California, and connected with yet another young rock ’n’ roll fan. (This experience also helps explain why I included a chapter on Blues and Jazz in this book. As Muddy Waters wrote and sang, “The blues had a baby and they named it rock and roll.”)

I hope you enjoy this collection of places and get a chance to go out and visit a bunch of them. Rock ’n’ roll combined with road trips is a timeless combination, after all.

To all of you who remember those pre-MTV days, when albums and radio ruled so much of our lives, I hope this book brings back a few memories. To the younger readers, who knows, maybe reading about all of these legends will inspire you to go start a band. And we can always use a few good new bands.

“For rock’n’roll fans who like to travel, there’s a new guide from Santa Monica Press:Led Zeppelin Crashed Here, by Chris Epting. In fact, the book is fun to leaf through even if you don’t plan on hitting the road any time soon. It’s packed with tidbits about larger-than-life music legends from the past 50 years and beyond, from places where they grew up and went to school, to venues where they performed and recorded their music, to sites that mark their sometimes tragic endings. You’ll be humming old Bruce Springsteen songs as you read about his youthful performances in New Jersey, and trying to remember the lyrics to the Rolling Stones’ “Have You Seen Your Mother Baby” as you gaze upon a photo of a Manhattan building featured in a promotion for the song in which the band appeared in drag.”
—Associated Press/Yahoo News

“Epting manages to pay tribute to the major players without marginalizing the minor ones, choosing moments in musical history that cover a broad range of styles and generations. Recommended for all public libraries.”
—Library Journal

“If you’ve ever dreamed of launching the ultimate rock ‘n’ roll road trip to experience these and other North American rock landmarks and milestones, this is the book you would take with you.”
—Forever Young magazine

“Road trips and rock ‘n’ roll are a combo as classic as burgers and fries. Here to enhance the joy of tunes on a roll is a new book from pop culture historian Chris Epting…. As in his other eight books, Epting reveals his passion for pop culture history, his dedication to sleuthing out and verifying little-known facts, and his remarkable knack for packaging them in a format that has inspired untold numbers of road trips. Whether you hit the highway to visit the places he has profiled or enjoy them from the comfort of a backyard hammock, Led Zeppelin Crashed Here is a fascinating and delightful treat.”
—RoadTripAmerica.com

“Rock and roll fanatics who enjoy seeing where their heroes stayed, or performed, will love this fascinating where-to-see book. Discover where Bob Dylan’s motorcycle crashed, where Elvis Presley first performed, where Ozzy Osbourne bit the head off a bat and the real location of Bruce Springsteen’s E Street.”
—Salt Lake City Tribune

“I don’t know how good Chris Epting is at crossword puzzles, but this intrepid pop culture expert sure knows how to crisscross the country, filling in the blanks in search of the “exact locations where rock and roll history was made.” Epting, who’s been doing these entertaining, eccentric compilations for several years now, offers about 600 entries here. Take the location of Bob Dylan’s fateful 1966 motorcycle accident off Highway 212 in Woodstock, or Bob Dylan Drive, the name on the street sign on the block in Hibbing, Minn., where the bard grew up. Certainly, future generations of Americans will be grateful for Epting’s pop peregrinations. One of my favorite selections shows how the gravestones of Dee Dee, Joey and Johnny Ramone differ dramatically (as well as geographically). As for the title of this volume, it refers to the Edgewater Inn in Seattle, where, in 1969, the hard- rockin’ British band partook in some “unseemly behavior” (Epting’s quotes) in room 242.
—New York Newsday

“The book is an extensive, entertaining journey through rock history that compiles more than 600 landmarks, from the store where Elvis Presley bought his first guitar to the site of Buddy Holly’s plane crash.”
—Dayton Daily News

“If you’ve ever wished you could stay at the same hotel where Led Zeppelin plunged an unfortunate fish into groupie lore forever, this is your book. Pretty much the definitive travel guide for many of rock ’n’ roll’s happening places, it offers a bewildering array of notable North American landmarks made famous by musicians from the past 100 years. Rock’s not the only attraction either — hip-hop, country, jazz and soul shrines all get their due.”
—Calgary Herald

“Looking for summer road trip ideas? Try one with a music theme and use Led Zeppelin Crashed Here: The Rock and Roll Landmarks of North America (Santa Monica Press) as your guide. . . . Led Zeppelin Crashed Here is a fun read—and intuitively organized, too. The appendix lists landmarks by state, so like a band planning to go on tour, you can get your itinerary in order long before you hit the road.”
—Asbury Park Press

The Largest U.S. Cities Named After a Food : …and Other Mind-Boggling...
Scroll to top