You are here: Home / blog / Reference & Social Sciences / Educating the Net Generation : How to Engage Students in the 21st Cent... 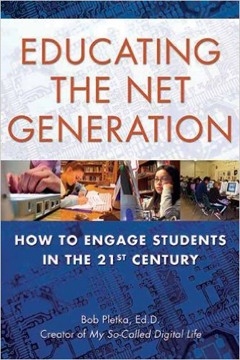 Educating the Net Generation: How to Engage Students in the 21st Century addresses the national problem of escalating high-school dropout rates and student disengagement, and offers solutions as to how to best involve students of the millennial generation. The book examines the unique characteristics of the Net Generation and explains how the educational expectations and needs of the Net Generation differ from their Gen-X parents and Baby Boomer grandparents. It also looks at why many students resist engaging in formalized education in schools and ultimately drop out.

Chapters featuring student interviews and photographs synthesize the perspectives of current high school students regarding their experiences, beliefs, and thoughts on learning, while a parallel set of parent interviews reveals what parents feel is important in their child’s education and how they would like to see schools engage their children in learning.

Recommendations for changes in school policy and the financial investment critical to turning the situation around are also included, along with an inventory/ checklist for parents, teachers, and school administrators to determine if their individual school environment has what it takes to keep students motivated and engaged.

Pletka here considers how to educate the millennial generation. Teaching kids born and raised on the Internet is fundamentally different, he argues, from teaching previous generations. Increasing high school dropout rates and widespread student disengagement are real problems, and Pletka explores the research on these conditions and talks with parents, teachers, and students about the needs of the latest generation. He offers credible strategies on how to reach these students in order to teach them. His authority on the subject is clear, and he includes lists of references and web resources for further study. Concise and well written, this book would be an asset to any academic library supporting education programs. It would also be useful in public libraries catering to parents and in school libraries supporting professional development for teachers and administrators.
— Library Journal

“Pletka is the author of My So-Called Digital Life, a book of student photographs and quotes about daily life in high school. This current resource can be considered an educator’s companion to that compendium. Pletka uses Digital Life project material to show educators how to increase student engagement (and thereby lower the current dropout rate of one-third). He proposes making school work relevant and personal to the students, engaging them in dialogue with the larger community. His crucial requirement (other than an interactive teaching style) is the availability and use of digital technologies by the students. Pletka’s insight into exactly what turns students off from learning comes from both student quotes and research studies backing up their stories. For low-achieving students, it is often an inability to understand, as well as a lack of one-on-one help. For high-achieving students it can be boredom—a result of taking notes from a textbook or listening to a teacher lecture day after day. The collaboration and interaction engendered by the inclusion of hands-on digital technology or group work in the classroom is recommended to mitigate both problems. Pletka is persuasive . . . this title is recommended to educators and parents for its insight into teen experiences and practical suggestions for change.”
— VOYA (Voice of Youth Advocates)

“Pletka (associate superintendent, Vista Unified School District, CA) offers a lucid, engaging overview of the Net generation and its educational experiences. Reflecting on the data collected through the My So-Called Digital Life project, in which high school students documented five weeks in their lives, Pletka argues for a change in teaching methods to create a sense of community, collaboration, and purpose in learning. The monograph starts with an overview of the Net generation and how its relationship to information and communication technologies differs fundamentally from that of previous generations. Synthesizing authentic student perspectives on school life, Pletka presents an insightful examination of the reasons for recent increases in student dropout rates and disengagement from school learning. Information and communication technologies are poised to play a key part in this solution. The latter challenges parents and educators to create a learning environment that is relevant, connected to society, and meaningful in the context of the 21st century. Summing Up: Recommended. General readers, lower-division undergraduates, and practitioners.”
— CHOICE