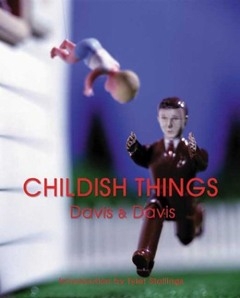 Those who have managed to save a favorite toy from childhood are aware that a kewpie doll, a teddy bear, or a plastic soldier can be a prodigious storehouse of fond memories. Just as cherished toys recall the joys and warmth of a happy childhood, so lost and abandoned toys retain repressed memories of prepubescent trauma and the deep-seated guilt associated with the playing of forbidden games.While abandoned toys are rejected outright, lost toys represent something evicted from consciousness as in a Freudian slip. Either way, the result is the same: the contents of the childish unconscious at large in the world. As found in parking lots, on sidewalks, or in thrift stores, these toys lack meaningful context and purpose-a situation Davis & Davis try to correct.

For the book Childish Things, Davis & Davis stage darkly humorous mini-psychodramas with abandoned toys on miniature sets; the toys portray the conflicted children who left them behind. A baby falls out of a window while its father rushes to try and catch it; an astronaut's life cord snaps and he floats away from his spaceship; a little boy is stuck atop a teeter-totter; an Eskimo child goes toe-to-toe with a polar bear, unaware of the killer whale looming behind him; a doll standing on a chair lifts her dress to a friendly, phallic worm.

Davis & Davis then photograph these tableaus with a shallow focus that suggests the bleary selectivity of memory. By these means, they hope to achieve for the conflicted, former toy-owners a measure of catharsis by proxy, while offering the reader an exploration of the darker side of humanity which deflates the cherished myth of innocence, and points out that not even children are untainted and sinless.

From the Introduction by Tyler Stallings


Little boys and girls play make-believe regularly. It’s one way of learning the good and the bad of what the world will offer as they grow. But what if their imagined scenarios seem tainted: a little girl in a kitchen with a teacup of spilled bleach, a baby in the mouth of an alligator, or a blue boy standing in a puddle of waxy, red blood? What kind of lessons are they learning? The collaborative team of Denise & Scott Davis, otherwise known as Davis & Davis, would like to know. They play with dolls to this day as an attempt to re-enact that psychological state when the rules of society are just beginning to be acquired. In their hands, these playthings are painstakingly staged, lit, and are given impossible and animated poses, with the aid of gossamer wires, all done in an effort to suggest a special but perverse moment in the real lives of real toys.

Davis & Davis use neither Barbie nor Troll dolls. Rather, they employ a range of discarded, thrift-store-bound figurines. They are made from a range of materials-rubber, wood, ceramic, and plastic-and their origins range from the early twentieth century to the present. Hardly any of them hold a place in our popular imagination; they have been forgotten. But Davis & Davis reinvigorate them with their own creepy yet funny episodes, like the evil-minded ventriloquist dummy in the movie Magic or the doll, beloved by little boys, though possessed by a murderous spirit, in the movie Chucky. Similarly, Davis & Davis’s synthetic and pliable thespians seem almost life-like when we experience them as larger-than-doll-size photographs.

But why have toys stand in for real people? The artists do so in order to get at the heart of why subtle shifts in behavior can be so disturbing, whether acted out or staged for a photograph-one way or the other, reality or artifice, each alternative requires a dose of the other in order to be accomplished.

The universal aspect of toys is that they feel like archetypes as a result of their stylization. They would appear to come from some higher source rather than a manufacturer’s imagination. And yet, despite their power as ideals, they are powerless, like a child, able to be manipulated in the sadistic hands of its owner. It is this contradictory message of innocence and transgression inherent in a toy, and in the everyday life of its owner, that motivate Davis & Davis to create alarming but seductive images.

The authors of Childish Things have collaborated on a variety of photography, video, sculpture, and installation projects over the last ten years. In addition to a recent solo show at the Heather Marx Gallery in San Francisco, Davis & Davis have exhibited at the Ulrich Museum of Art, the Yerba Buena Center for the Arts in San Francisco, the Downey Museum of Art, and the Huntington Beach Art Center, and at scores of universities, galleries, and art centers across the country. Their work is in the collections of the Brooklyn Museum of Art, the Ulrich Museum of Art, California State University Los Angeles, California State Polytechnic University Pomona, and the Kinsey Research Institute. Davis & Davis are married and live in Los Angeles.

“These photos by Davis & Davis will make you laugh and squirm! You’ll love their wonderful look at child anxiety and sexuality: Boy meets boy (or girl), a bunny lovin’ a carrot . . . This book is a must for your collection.”
—Catherine Opie, photographer

“Clever, mysterious, funny and weird-what’s not to like?!”
—Paul Reubens (Pee-wee Herman)

“This is beyond my familiarity.”
—Ed Ruscha, artist

“If there were a purgatory for lost and forgotten toys, the team Davis & Davis might be appointed its resident art therapists. In their luscious color photographs, Davis & Davis use toys they rescued from the streets and thrift stores to stage simple but poignant psychological dramas.”
—Los Angeles Times

“The photographs of Davis and Davis access an uncomfortable part of childhood when play was charged with a scab-picking provocativeness, toys were made strange, and laughter came from a cruel region of prepubescent impulse. That point in the game when someone got hurt, and everyone ran home.”
—Robert Mailer Anderson, author of Boonville

“Babies fall from second-story windows. An Eskimo child is attacked by a leaping orca. In the photo book Childish Things, L.A. artists Davis and Davis place tiny figurines in bizarre settings unintended by the original toy makers. After perusing this book, we’ll never look at our bendable little friends in quite the same way.”
—Los Angeles Magazine

“The husband and wife team deliver devious scenarios captured on film. Art that is clever without being smarmy is a rare thing in the art world. . . . This is the perfect present for someone whose conformist brain needs expanding, so reserve a case for the next family reunion.”
—Coagula Art Journal

“Wickedly delightful . . . With an evocative mix of the malevolent and whimsical, Davis and Davis’s carefully constructed, candy-colored photos place discarded dolls in unnerving and often sexual situations, which will remind you of a time when you peeked vainly up your dolly’s skirt only to be confronted with a depressingly desolate bump.”
—Curve magazine

Cats Around the World
Scroll to top