You are here: Home / blog / Sports / Can a Dead Man Strike Out? : Offbeat Baseball Questions and Their Improbable... 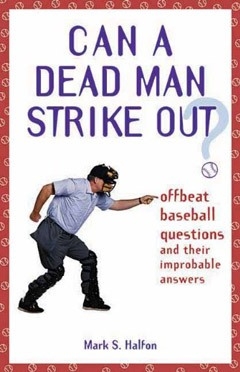 Fascinating vignettes that provide the true accounts behind baseball's most unbelievable circumstances fill this engaging collection of questions and narratives from every period in the history of America's favorite pastime. Unlike standard trivia books, it is the stories behind the answers-and not the answers themselves-that provide the entertaining surprises.

For example, the answer to the question, "Who was the first outfielder to throw out three batters at home plate in one game?" tells the story of "Dummy" Hoy, a deaf mute who had a distinguished 14-year career, and whose disability may have led umpires to use hand and arm gestures when calling balls and strikes.

Baseball historians, statisticians, trivia buffs, die-hard fans, and anyone intrigued by the subtleties of the game will find hours of pleasure in this unique look at our national pastime.

“People ask me what I do in winter when there is no baseball. I’ll tell you what I do. I stare out the window and wait for spring.”
-Rogers Hornsby

Baseball is an unpredictable game. Unusual plays can happen virtually any time during a game. Can a Dead Man Strike Out?is focused on offbeat events that have occurred or might occur in the course of a baseball season.
o Is it possible for a team to have the best record in baseball without making the playoffs?
o Can a pitcher win a game without throwing a pitch?
o Was there an American League pitcher who never played in a major league game?
o Can a player score a run without being in the game?

The answer to every one of these questions is “yes,” and each event happened.

Every answer takes the form of a narrative that puts the event into context. Some of the game’s more memorable events and stories-typically with an unlikely twist-are the focus of most questions. Special attention is paid to baseball records and feats that have been ignored or forgotten but nonetheless deserve recognition. Virtually all of the records mentioned in the book cover the modern era, which began in 1903 when the National League and American League merged to form the major leagues.

Each question and answer function as a unit to tell a story about a substantive aspect of the game. Often the question and answer should be read together. Virtually every narrative attempts to capture a glimpse of the culture and history of baseball. In many cases, the point of a passage is to make the reader aware of some magical moment in baseball history. In other cases, the challenge is to figure out how certain events could happen. In all instances, the purpose is to enjoy and appreciate the subtleties of a game that continues to evoke wonder.

Can a Dead Man Strike Out? is as likely to mention the achievements of Urban Shocker, Iceberg Chamberlain, and Henry Mathewson as those of Babe Ruth, Ted Williams, and Christy Mathewson. Baseball historians, statisticians, trivia buffs, die-hard fans, and the inquisitive will have their understanding of baseball rules, records and history challenged. Get ready to journey down the traveled road of baseball.

The author of Can a Dead Man Strike Out? has published two books on moral philosophy- Integrity: A Philosophical Inquiry and Norms and Values-as well as articles and book reviews in professional journals. He is currently Associate Professor of Philosophy at Nassau Community College in New York.