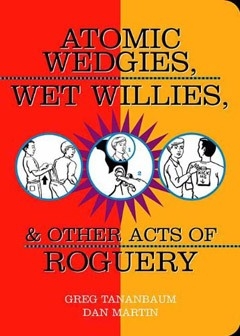 Atomic Wedgies, Wet Willies, & Other Acts of Roguery is your complete guide to the most annoying and embarrassing pranks ever practiced at summer camp, on the playground, or by an older brother or sister on a younger sibling!

Each of the more than 50 illustrated entries includes a definition of the prank, followed by tips for execution and countermeasures to prevent an attack. An exclusive rating scale for each prank is also provided.

Learn the best technique for placing a “kick me” sign on your worst enemy’s (or little brother’s) back, or how to wriggle out of a noogie-giver’s evil clutches!

With its droll tone and tongue-in-cheek advice (sample Pants Yank countermeasure: “Make intelligent clothing and accessory choices, such as belts, button flies, and tight-fitting pants”), Atomic Wedgies, Wet Willies, & Other Acts of Roguery provides “sage” advice for the young and the young at heart. 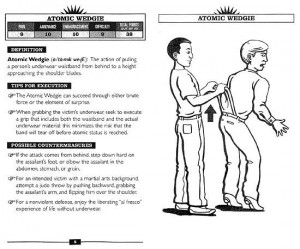 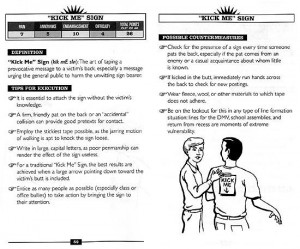 The co-author of Atomic Wedgies, Wet Willies, & Other Acts of Roguery is president of The Berkeley Electronic Press, a publisher of online scholarly journals. He lives in the San Francisco Bay Area with his family, where he aspires to be a “Wedgie King.”

The co-author of Atomic Wedgies, Wet Willies, & Other Acts of Roguery is vice president of Homegain, an online realty portal. He lives in the San Francisco Bay Area with his family, where he aspires to be a “Wedgie King.”

“The deal: It’s a small paperback filled with multiple ways to annoy and embarrass a selected target. From illustrated directions on how to execute the perfect wet Willie, a quick pants yank or a loud burp ’n’ blow, this book has it all plus a scale that rates all the irritating tricks on four factors — pain, annoyance, embarrassment and difficulty.”
—St. Paul Pioneer Press

“In their new book, Greg Tananabum and Dan Martin have assembled 53 of mankind’s greatest pranks, in the hopes of igniting a roguery renaissance. . . . It’s the way life was meant to be enjoyed-unplugged and severely bruised.”
—Boston’s Weekly Dig

“I was never really a kid that got picked on in the archetypally juvenile ways depicted in Atomic Wedgies, Wet Willies, & Other Acts of Roguery (Santa Monica Press, $11.95 SRP), but if such an unlucky chap, a manual like this would have been helpful. Like the similar Worst Case Scenario Handbook, this compact, handy little tome outlines the aforementioned acts of the childish bully, as well as over a dozen more – from charley horses to chair yanks – and gives helpful tips on how they’re performed, and also how to avoid being their victim. Quite helpful, that.”
—IGN FilmForce

“This is a great book for the amateur prankster, the defenseless victim or that special someone who left his heart on the elementary school playground along with some kid’s tightie-whitie waistband.”
—The Independent Florida Alligator

“This book is a great way to revert back to your childhood days of prank pulling. It not only details how to pull some of the more famous pranks, it also outlines how to avoid having them pulled on you. . . . Atomic Wedgies will provide you with hours of fun. Whether you are just reading it or trying out some of its tactics on an unsuspecting victim, this book will be entertaining for anyone who picks it up. Anyone, that is, except the unsuspecting victim.”
—Bowling Green News

“If the cast from National Lampoon’s Animal House were to join forces with a group of prepubescent boys, they would probably come up with something similar to Atomic Wedgies, Wet Willies, and Other Acts of Roguery by Greg Tananbaum and Dan Martin.”
—North Texas Daily

The Art and Design of Contemporary Wine Labels
Scroll to top