From Michael Bohdan's Introduction:
"Insects have been around for millions of years, and have demonstrated time and again an incredible ability to survive and thrive in great numbers. As a professional exterminator, I can't say I'm altogether upset about this fact. After all, my livelihood depends on the reproductive powers of house and garden bugs. But I'm guessing you could care less about the sex lives of tiny pests, and are more interested in how you can rid yourself of undesirable critters invading your house and yard. In this book, I'll teach you my tricks of the trade, tell you a little bit about myself and my industry, and give you some tips and insights on the safest and most effective ways to control pests. Hopefully, we'll have some fun, too!" 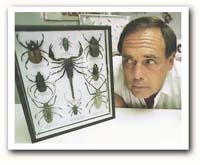 Excerpt–Chapter 2: Pests and Man
When people say that insects have been around before we were here on Earth, and will survive long after we’ve gone, they’re probably right. Few of nature’s creatures are as adaptable and hearty as the bug. In the pest control business, just when we come up with an effective treatment for a particular insect, they develop a resistance to it and we have to start over from scratch. People often say that because the cockroach has been around for 350 million years, we ought to be able to learn something from him. But I’m not sure how much we can learn from a creature whose favorite things to eat are dog food, beer and bananas! 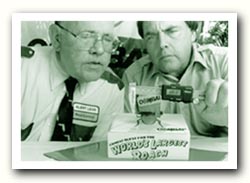 Estimates vary on the different kinds of insects that currently “crawl” the Earth. Guesses range anywhere from 750,000 to over a million and a half species. The total number of insects alive at any given moment is impossible to even estimate. But scientists have tried to make analogies like “the total weight of bugs is greater than the total weight of any other species, including mankind” blah, blah, blah. All you need to know is, they’re clever, tough and breed like the dickens. Insects make rabbits look like cloistered nuns.
The females of some species lay up to a million eggs in their lifetimes, with these eggs often hatching long after mom was crushed under the weight of someone’s foot. So for everyone who has a notion that we’ll “defeat” the insect world some day, get real. It ain’t gonna happen. We as humans have to respect the fact that our development is displacing insects and other animals from their natural habitats. Also, it’s time we realize that not all insects are harmful or destructive.
Insects basically suffer from the same problem that afflicts the Hunchback of Notre Dame, the Phantom of the Opera, and other freakish folks. Because they’re ugly, we assume they’re dangerous and should be feared. But just as Quasimodo had a good heart, and the Phantom was one heck of a kisser, many “ugly” insects help us in ways you’d never dream.

Take the beetle for instance. When one of those suckers scurries in front of us on a garden path, it’s all we can do to stop ourselves from treating the little guy to a tennis-shoe sandwich. In reality, that beetle is serving as a valuable food source for useful animals like birds and lizards. It’s also preying on even smaller insects like aphids that damage plants and destroy gardens.
Anyone who’s read Charlotte’s Web knows that spiders are actually big softies. And anyone who’s seen a web full of flying pests knows that spiders are like nature’s flypaper, capturing any bug foolish enough to cruise into their Cobweb Condo.
I think part of our problem is that we’re afraid of things that go buzz in the night. The fact that this legion of little critters is scurrying around when we’re sleeping or not paying attention really freaks us out. Psychobabblers have come up with a fancy word for a fear of insects–“entomophobia”–but I prefer “bug-brained.” Bug-brained people stomp on every spider they see, crunch every beetle and molest every moth. They fill their homes with so many bug-bomb fumes they end up risking their own health more than the insects’.
Now, I don’t want you to think that I’m against insecticides, or the proper control of household and outdoor pests. But I think people would benefit from a little more common sense and self-control when they encounter an insect on their property. The other day, I had a woman who was originally from New York call me out because she found one cricket in her house. I told her that just because you see one cricket doesn’t mean there are ten thousand of them hiding behind your closet door waiting to jump you. Not every insect is a cockroach.
Part of the problem may be movies like Arachnophobia that put the idea into people’s minds that spiders can take over your house and drive everyone crazy. Why do we need spiders for this when in-laws already do such a bang-up job? Seriously, though, the odds that anyone would ever be driven from their home or apartment by an insect invasion are probably 1,000,000 to 1. You’d have a better chance of seeing the Cubs win the World Series in your lifetime.
All I’m trying to say is we shouldn’t throw out the baby with the bath water. There are techniques and treatments we can use to control our pest problems without resorting to overkill.
We’re never going to come out on top in a war against bugs, but we can still win a few battles. The key is knowing when to raise the white flag, and put down the Black Flag.

German Cockroach
Size: 1/2 to 5/8 inch long.
Identification & General Information
Achtung, this bug is a big ‘un! Found worldwide, the German variety is the most common species of roach on the planet, and as such is a global headache of major proportions. Under ideal conditions, it only takes 30 days for this roach to go from an egg to an adult. It is the cause of many illnesses and allergic reactions in people, and will eat virtually anything. It especially likes books (the taste of binding paste is a delicacy!). Apparently, its favorites are Tail of the Cockroach, Munching on the Grapes of Wrath, and Oedifice Wrecks.
Preventative & Low-Impact Treatment
Sanitation is the key. Even the smallest crumbs of food will attract them. In addition, entry points in kitchens and bathrooms should be well-sealed. Don’t forget to check the points where pipes enter plaster.

Because they like warm, humid environments, these roaches will also be found near stoves, sinks and dishwashers. Try to keep these areas from getting overly damp, and check regularly for signs of German roach infestations. If you can cover up or seal potential harborages in these environments, you may drive these roaches into the open, or back outside in search of moisture.
Chemical Treatment
Forget the sprays here. The best plan of attack is to use a combination of bait stations or gels. The most effective contain hydramethylnon or fipronil.

Odorous Ant
Size: 1/8 inch long.
Identification & General Information
This black-colored ant gets its name from the foul smell given off when it is smashed. If you do happen to smash it when company’s over, just blame the dog. Most infestations of this species occur in the spring and near kitchen sinks, especially on outside walls and countertops. When disturbed, the ants move in an erratic pattern.
Preventative & Low-Impact Treatment
Trim bushes next to the house, leaving a good air barrier between your yard and foundation. Store all firewood off the ground, and always check the logs for signs of infestation before bringing them into the house.
Take care to remove any and all potential outdoor nesting sites. These include piles of leaves, old 2 x 4s laying around by your foundation, rotting-out play toys or athletic equipment, and bags of improperly sealed garbage left out for trash day.
Because most odorous ant activity in the home occurs near kitchen and bathroom sinks, make sure that counters and stove tops are frequently wiped, and kept clean of food products and excessive moisture.
Chemical Treatment
Since this is an outside-invading ant, the best control is to use a micro-encapsulated insecticide at the base of your home. Treat the area from ground level to about a foot up the sides of the house. Make sure to treat all cracks and crevices. If you have a slab-foundation home, dust all weep holes.
Using either boric acid or DE with pyrethrum, take a hand duster and treat all plumbing voids under the sinks, as well as weep holes and any cracks in caulking at the lower parts of window sills. The placement of approved bait stations on the countertops will knock off the rest of the ants. Control is not quick; it may take several weeks.
Remember, if you stomp on these critters, you may have to light a match and explain to everyone how you really didn’t have Mexican food for lunch.

The author of What’s Buggin You? is a licensed, professional pest control operator with over two decades of experience. A former Regional Director of the Texas Pest Control Association, Bohdan holds a degree in zoology and operates a pest control service in Plano, Texas. His Cockroach Hall of Fame has received national media coverage, and is featured in the book Offbeat Museums. He makes his home in Dallas area.

“Fun and informative-a great reference for every garden library. Bohdan is a legend in the insect industry. What’s Buggin’ You? should appear on your bookshelf right next to Hortus Third.”
—The Growing Edge

“I laughed and learned the whole way through.”
—Dallas Morning News

“The best of the pest men!”
—Good Morning America

“A good buy . . . the material is helpful, and above all practical, with a large dose of common sense.”
—Boston Globe

We Were Going to Change the World : Interviews with Women From the 1970s &...
Scroll to top