You are here: Home / blog / Biography & Memoir / Mark Spitz : The Extraordinary Life of an Olympic Champion The Only Authorized Biography of the
Greatest Olympic Athlete of All Time!

Mark Spitz is arguably the most famous and successful Olympic athlete of all time because of his legendary performances at the 1972 Olympics, where he won seven gold medals while breaking seven world records. His amazing life story is told for the first time in the authorized biography Mark Spitz: The Extraordinary Life of an Olympic Champion.

And the meatier stories—the role his father played in his career, his often stormy relationship with coaches and teammates, his experiences as a Jewish athlete with anti-Semitism and the Munich massacre, his impact on the commercialization of swimming, his relationship with Michael Phelps, and others—have been largely unknown, ignored, barely touched upon, or distorted.

Mark Spitz: The Extraordinary Life of an Olympic Champion provides insights into Spitz’s career, behind-the-scenes anecdotes about him and his competitors, and untold stories that shed light on his complicated personality and relationship with his father. Old and new fans alike will appreciate the depth and details of this swimming icon’s story. 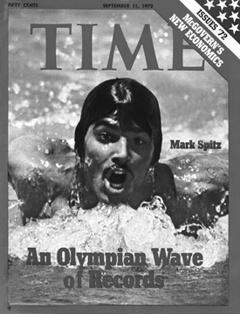 It is fair that one should expect extraordinary achievements to come from the Olympic Games. Founded in 1896 as a celebration of sport for the youth of the world, the original intent quickly changed in 1900 when the national flags of participating countries were brought into Paris’s Vélodrome de Vincennes for the first time.

Winning did matter and it was proven immediately. And as the Games traveled on it was proven that a gold medal worn by a favorite son or daughter could in fact lift the pride and spirit of an entire nation.

I first became aware that Mark Spitz might be a special athlete during his time at Indiana University. The famed coach Doc Counsilman suggested it more than once, and West Coast club coaches George Haines and Sherm Chavoor echoed the same theme.

At the 1968 Games in Mexico City, Spitz predicted six golds but got only two. It didn’t seem to disappoint him all that much—it just made his fire burn hotter, and his determination grow greater. I had never seen an athlete’s eyes reflect such will; it was pure joy to watch him day after day, and the anticipation of each race was breathtaking!

It was in 1972 that the world was stunned by his remarkable performance. At the Munich Olympics, Spitz won the incredible total of seven gold medals, setting seven world records (four individual races and three relays) in the course of accomplishing this extraordinary feat. 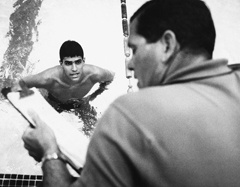 I was the ABC announcer for every event held in the new Schwimmhalle, and by the time Spitz had won the last of his gold medals it was a miracle there was still water in the pool. The great Aussie swimmer Murray Rose was my partner on the broadcasts, and even though Rose had won several Olympic gold medals himself, he joined me and millions of others in trying to find the right words to adequately describe the remarkable performances we were so privileged to witness.

At the end of Spitz’s fifth race, fifth gold medal, and fifth world record, a Russian journalist I had come to know suggested that “perhaps Olympic officials should check Spitz more closely—he may have the genes of a dolphin!”

Who is Mark Spitz? Not that many people really know, because athletes like Spitz who perform at such a high level need to be insulated in order to retain their focus. However, in this book, Rich Foster reveals the real Mark Spitz, and for that, I for one will be eternally grateful.

is the current president of United States Aquatic Sports, the umbrella organization that represents all U.S. aquatic sports (swimming, water polo, synchronized swimming, and diving) in the international governing body. He has also served as a board member of the United States Olympic Committee and as president of USA Water Polo for twelve years. A practicing attorney, Foster specializes in sports law and has represented numerous Olympic and professional athletes. He also teaches a graduate-level sports law course at Long Beach State University. He lives in Long Beach, California.

“What is it that makes a champion? Why is it that after almost 40 years, Mark Spitz is still the most famous swimmer in the world? Like Muhammad Ali and Michael Jordan, Mark Spitz excelled when the pressure was the greatest and the spotlight the brightest. In this remarkable biography, Rich Foster explores and explains the complexities of the personality and makeup of the man who accomplished the greatest athletic achievement in the history of the Olympic Games.”
—Bruce Wigo, CEO, International Swimming Hall of Fame

“Fans of Mark Spitz and swimming in general will love this thorough look at the personal and professional lives of this great Olympian.”
—Mark Schubert, head Olympic coach, USA Swimming

“Mark Spitz is one of the most significant figures in the history of the Olympic Games and is a remarkable human being. His story is long overdue.”
—Peter Ueberroth, chairman, United States Olympic Committee

“I have known Mark for 35 years. He is a true Olympic icon. We have traveled the world together. What a life he has led!”
—Bruce Jenner, Olympic gold medalist, decathalon (1976)

“Rich Foster does a magnificent job telling the true story of the greatest swimmer of all time.”
—Brent Rutemiller, publisher, Swimming World Magazine

“This is a riveting, inspiring look at one of the most important American athletes in the history of sports.”
—Ross Wales, former Honorary Secretary of FINA and Olympic bronze medalist, 100-meter butterfly (1968)

“It’s been 36 years since Mark Spitz won a record seven gold medals in swimming during the tragic 1972 Munich Olympics, and he remains a giant figure in the history of both competitive swimming and the Olympics. The iconic photograph of Spitz wearing his swimsuit and all seven medals was the best-selling poster of a sports figure until the late 1970s. Foster, the current president of United States Aquatic Sports and a former member of the U.S. Olympic Committee, takes the reader back to Spitz’s turbulent youth, when he was seen by many as an arrogant jerk. Foster’s balanced and meticulous retelling of Spitz’s challenges, struggles, and triumphs is informed by extensive interviews with Spitz as well as his family, coaches, and competitors. Furthermore, the fine points of swim racing are discussed here . . . While swimming does not generally garner the interest that other sports do, Spitz is perhaps the finest swimmer of all time, and his ongoing life is well recounted here. Recommended for collections focused on swimming or the Olympics.”
—Library Journal